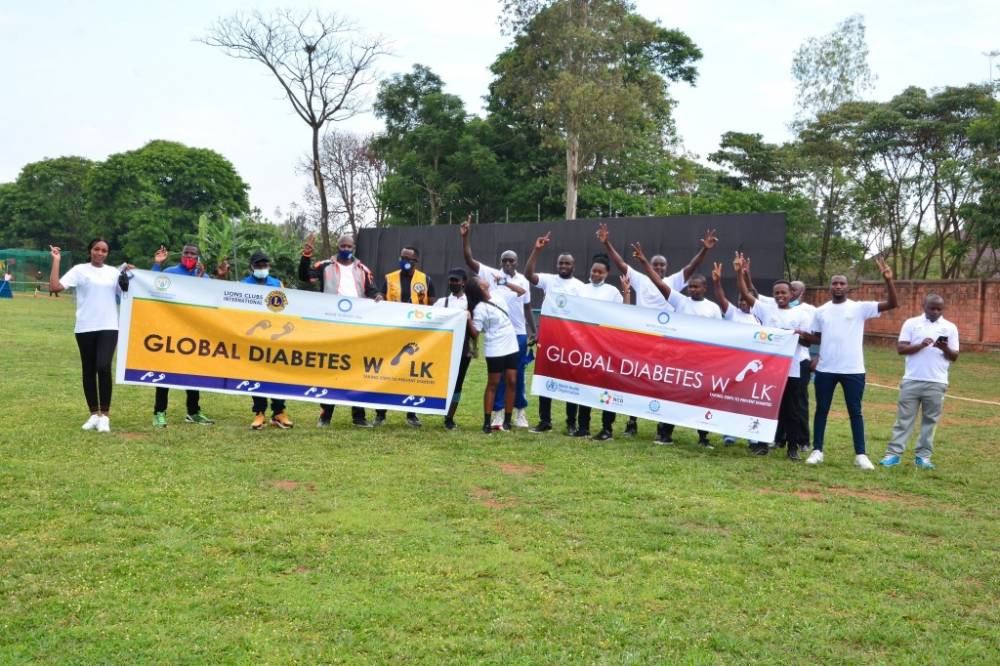 On 14th November 2021, Rwanda NCD Alliance joined the rest of the world to mark the World Diabetes Day under the theme: “Access to Diabetes Care.”

The Global Diabetes Walk is an annual global diabetes awareness-raising campaign that takes place every November. It was established by the World Diabetes Foundation (WDF) to involve Civil Society Organizations worldwide in the commemoration of the World Diabetes Day.

The event brought together other CSOs such as Rwanda Diabetes Association (RDA), Lions Club Kigali, and a delegate from the World Diabetes Foundation (WDF), Ms. Nathalie Bille.

The Global Diabetes Walk was organised concurrently with the National Cross-country Championship competitions managed by the Rwanda Athletics Federation (RAF).

At the end of the walk, the Director of the Rwanda Diabetes Association (RDA), Etienne Uwingabire, joined the stage where awards were presented to cross country championship competition winners and delivered a message of the day. He took off time to warn Rwandans against diabetes.

“We are encouraging everyone to be physically active due to the fact that walking and participating in physical activities at large are the common and affordable preventive majors against diabetes. Additionally, maintaining a healthy diet, avoiding harmful use of alcohol, and quitting/avoiding tobacco smoking are all beneficial in the fight against diabetes and other NCDs. On the other hand, for people living with diabetes, being physically active makes the body more sensitive to insulin, which helps in diabetes management. Physical activity also lowers the risk of heart disease and nerve damage by helping to control blood sugar levels. Walking with us today, allowed individuals, friends and others to take care of themselves while also raising awareness about the importance of diabetes prevention and care,” he said.

The events marked the climax of a successful week-long public awareness campaign on Diabetes planned for diabetes awareness, education, and advocacy in Rwanda.

The good news is that some NCDs services have been decentralised to health centres level. In line with the theme – “access to diabetes care” – the Rwanda NCD Alliance mobilised the general population to reach out to the nearest health facility to be checked for diabetes and other NCDs.

Rwanda NCD Alliance also participated in award-giving ceremonies. The Alliance provided branded T-shirts with a blue cycle (the universal symbol for diabetes) and a Global diabetes walk message similar to those worn by global diabetes participants.

Today, diabetes affects over 422 million people worldwide. If no preventive measures are taken, that figure could rise to 578 million by 2030. The majority of the people living with this condition suffer from Type 2 diabetes, which is often preventable. Diabetes affects four out of every five people in low- and middle-income countries.

Diabetes is a chronic disease that occurs when the pancreas fails to produce enough insulin or when the body fails to use the insulin produced as effectively as it should. Hyperglycemia, or high blood sugar, is a common side effect of uncontrolled diabetes, and it can cause serious damage to many of the body’s systems, particularly the nerves and blood vessels, over time. Diabetes leads to blindness, renal failure, heart attacks, stroke, and amputation of lower limbs.

Diabetes can be treated and its consequences avoided or deferred through diet, exercises, medication, and regular screening and treatment for complications.

Diabetes is classified into three major types: Type 1 (the body attacks itself by mistake, preventing the body from producing insulin), Type 2 (the body does not use insulin well and cannot maintain normal blood sugar levels), and Gestational Diabetes, which develops in pregnant women who have never had diabetes.